As a web designer, I’m always finding useful ways to use website screenshots to benefit my work, and streamline my workflow. Whether I’m creating mood boards, presenting concepts to a client, comping up web templates, or just collecting examples for inspiration, a useful method for capturing multiple screenshots comes in handy. I’ve listed below, in no particular order, a collection of useful screen capturing websites that I use on a regular basis, along with they’re specific benefits.

In comparison to other sites, it’s quick, and offers a selection of multiple capture sizes. This interface is relatively simple to use, as well.

How many new Android + iOS mobile games are released each year? The user interfaces and graphics have been improving rapidly to create a large marketplace of mobile games. Marketing-savvy developers will usually create a personal website or webpage dedicated to information each new game release.

In this gallery you’ll find 40 brilliant examples of mobile smartphone game website layouts. Some are hosted on their own domain while others are subpages within a game studio’s website. But the design is always focused around the game itself, pushing curious visitors to look deeper into the features and maybe purchase a copy. If you’re looking for design ideas to build into your own mobile game website, this showcase has a lot of great concepts.

December 24, 2013 by Cristina Simionescu No Comments 111 views Share this

Inky Deals is one of the leading deals websites in the design community, with an extended family of more than 300,000 design enthusiasts. It’s the place to go if you want to buy premium resources at unbeatable prices, whether you’re a graphic or web designer, developer, or business owner looking to improve yourself and your work. 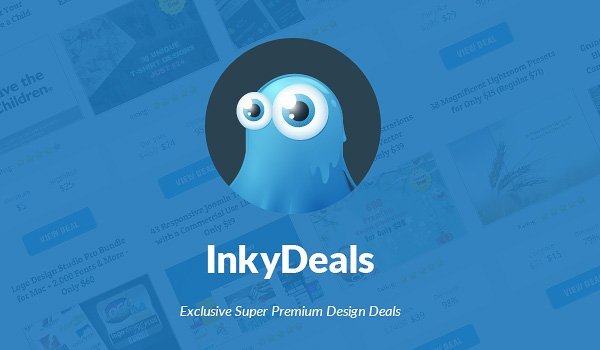 Earning Over $100k Per Year as a Freelancer

Every week my email inbox is overflowing with marketing emails that, for the most part, are not very interesting. But a few weeks ago I got an email from the guys at LearnWebDevelopment.com that really caught my attention. I met these guys at a conference last year, and they invited me to check out their program. After spending some time with them and exchanging a slew of emails, I realized they had a pretty unique program, and this was something my readers would be interested in.

In the spirit of full disclosure, I want to be extremely transparent with my readers. Because I’m such a fan of their product I’ve partnered with them to be an affiliate to help promote their training. They offer a great product and I will receive compensation from them if you purchase their training, so it’s a win-win for everyone.

A Simple Look Into Adaptive and Responsive Web Design

While a responsive web design is designated to fit the original web page’s contents into the specified container. Although adaptive web designs are less popular than responsive, neither style is necessarily better than the other in terms of overall viewing quality.

When viewing a web page written with a responsive web design, the site aesthetics may vary depending on the type of device or browser the user is viewing on. For example, viewing a standard web page on a mobile phone versus on a standard computer monitor. These websites, when being viewed on a monitor, display the web page with full imagery and content normally.

Useful Tips for Building a Brand Identity with a Business Card

Brand design is never easy; in fact, it’s such a delicate task that you never know when you got the right thing and your career depends on it. Business cards are a means of presentation taken for granted these days. If having no social media makes you non-existent, how can you exist in the real world without real branding?

The Easiest and Fastest Way to Identify a Font

People have the tendency to get things stuck in their heads. Mostly things that they like but can’t find the second time. It’s that cool tune you heard on the radio while driving but it didn’t say what it is called, it’s that cool pair of sneakers that someone has but you don’t know from where he bought it from, it’s that awesome font you found the other days while surfing the web and really want to use it in your next project but there isn’t anyone who can tell you what it is. Well, designers, I have good news for you, unfortunately I can’t help those of you out there still searching for the song they heard on prom night when they almost kissed their high school sweetheart.

Your search for recognizing fonts that are stuck to your retina and won’t go away is over because of Whatfontis.com, an website that can basically identify every font that’s out there, with the exception of custom made fonts. This website is a free and easy to use font identifier that allows you in just 3 steps to uncover the font you are looking for. And if somehow it doesn’t recognize the font that you’re looking for, it will show you a lot of similar ones from their library of more than 280,000 fonts.

You will see in the images below that the site is really easy to use, but you should keep in mind that the results won’t be accurate each time because sometimes the font you want to identify isn’t in its database, but still it will show you a selection of similar fonts from which you can choose and I find this to be a really good feature.

Improve Your Creativity & Problem-Solving with these 7 Brainstorming Techniques

Do you allow yourself enough time for creative brainstorming?

Maybe you feel uninspired because it takes time to be creative–time that most freelance designers don’t work into their schedules. The true creative cycle looks something like this:

But many designers act like this is the cycle:

No one is a never-ending fountain of creative ideas. We all need inspiration sometimes. In this post, I share seven great brainstorming techniques that you can use to improve your creativity and solve problems. If you’ve ever suffered from creative block, this post is for you.

If you liked this post, you may also like My Best Ideas for What to Do When Your Freelancing Creativity Fails You.